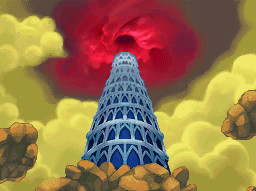 Temporal Tower is the place where the factory of time resides. Dialga also makes his home here.

Temporal Tower is ubicated on Dragon´s Paradise but there are only two ways to ge to it.

The first one is to follow the Mt. Coronet trial in earth then cross the sea of clouds to the sea of time.

The second one is to go to the Hidden Land in Dragon's Paradise then take the left path to Temporal Tower.

In Dragon's Paradise: The Ruined Future, Temporal Tower was destroyed so the only way to access a frozen in time Temporal Tower is to go to Coronet Island then to the Spear Pillar to form a portal between dimentions.

The outside of the tower is always surounded by an eternal twilight and by some floating rocks.
The Sky here makes You feel that your sacrifice will not be in vain~Auraldo Thomas Said when he first visited the tower.

The tower is almost mechanical like. The way it floats in the sky is thanks to the many mechanisms inside it.Bronzongs and even unowns make nest here but they are still there because the tower needs some kind of protection.

Before the top of the tower there's a chamber with a lot of destiny orbs (those ones like the ones in Destiny Tower) but those are broken.

At the top of temporal tower Dialga makes its home.Dialga is also in charge of protecting the tower from any intruders trying to take the time gears out of place.